Guy Maddin and the brothers Johnson team up for a “parallel-universe version” of Vertigo, deliriously recreating the legendary Hitchcock film from a variety of high, low, and long-forgotten Bay Area sources. The Green Fog is a wickedly fun feat of cinematic scholarship, and an uncannily original film experience that promises to set brains a-buzzing.

With special guest Guy Maddin joining the live stream for a post-film discussion.**

“It’s not so much an assemblage as it is a conjuring. You don’t just watch these clips — you see through and between them. The juxtapositions create vital, cosmic connections.” - Bilge Ebiri, The Village Voice

“The Green Fog is a wonder of excavation and urban history.” - Ben Kenigsberg, New York Times

Director Statement:
Whether or not you’ve seen Alfred Hitchcock’s Vertigo, the sadistic master's internecine engagement with the male gaze, we want you to get lost in the mysteries and delights we found in making our own adaptation. Our medium is footage repurposed from movies and television shot exclusively in San Francisco. Our version, shaped for our own pleasure out of newly defamiliarized material, is more a Vertigo “shape” that somewhat rhymes with, occasionally reconfigures, and sometimes flips like a fried egg the savagery and victimhood of the annihilating original. Sit back and let the emulsions, pixels and taxidermy dust wash over your eyeballs!

About the filmmaker:
Guy Maddin is the director of twelve feature-length movies, including The Forbidden Room (2015), My Winnipeg (2007), The Saddest Music in the World (2003) and National Society of Film Critics Best Experimental Film Prizewinners Archangel (1990) and The Heart of the World (2000). He has also mounted around the world over seventy performances of his films featuring live elements – orchestra, sound effects, singing and narration. Maddin was Visiting Lecturer on Visual and Environmental Studies, 2015–18, at Harvard University. Since 2011 Maddin has collaborated with Galen Johnson and Evan Johnson under the banner of Development Ltd., their Winnipeg-based filmmaking collective.

**To submit questions during the discussion, please sign up for a free Twitch account in advance - all that it requires is a working email address to get confirmed (which will not be visible to anyone else on Twitch), a "date of birth" to verify that you are over 18 years of age, and for you to pick a username and password that aren't already in use on the site. Please understand that no account or sign-in is required to view the films & discussion on our Twitch channel, so you'll only need to sign in on Twitch if you wish to post questions in the chat. 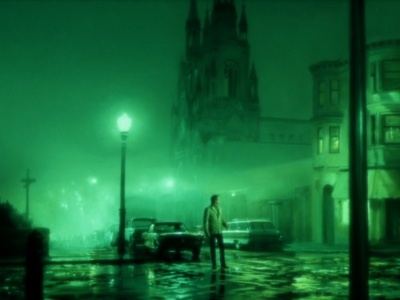